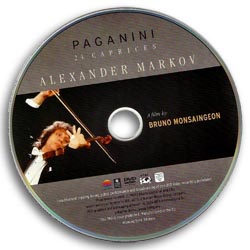 It is without doubt one of the worst nightmares I ever had: that under duress and in front of a bloodthirsty audience, I was compelled to go out on stage and perform all of Paganini’s 24 Caprices.

So it was not without a touch of sadism that, on passing through New York one evening in April 1986, I went to a concert, which by chance I saw advertised, given by a young American violinist of Soviet origin, Alexander Markov, completely unknown to me, who was to play precisely this fearsome score.

As any violinist knows, there is no work in the violin repertoire in which the ratio of difficulty versus effect on the public is so low.

The non-violinist will obviously realise that this is a highly strenuous exercise, but cannot suspect the dreadful inner ordeal suffered by the virtuoso. Only the performing violinist can know the real physical torture inflicted by certain Caprices, whereas those which inevitably draw ovations from the audience are nearly always the most accessible, within the reach of any technically competent violinist (the well-known 24th Caprice for instance, the last item in the collection).

Strangely – the above-mentioned ratio offers the real explanation for the anomaly – none of the great violinists of the first half of the 20th century has ever played in public or recorded Paganini’s complete score: Fritz Kreisler, Jasha Heifetz, Nathan Milstein, David Oistrakh only included three or four in their repertoire at any one time. Only Zino Francescatti and the young Yehudi Menuhin frequently played and recorded about ten of them.

Then, following on the heels of Leonid Kogan and Ruggiero Ricci, from the seventies onward, the most accomplished violinists of the new generation, who cannot reasonably be expected to possess in the same measure the powerful musical personality of the greatest among their forebears, added the legendary score to their repertoire: Michael Rabin, Izhak Perlman, Salvatore Accardo, Shlomo Mintz, Frank-Peter Zimmermann.

In spite of their incredible mastery of the instrument, it always seemed to me, when listening to their concerts or their recordings, that the most ‘secretly’ difficult of the Caprices compelled them to a minimum of caution (which I considered unavoidable), preventing a genuine musical: abandon. In other words, the exercise in all its daring somehow reduced the nature of most of the 24 pieces to mere exercise.

It was a very different experience which Markov’s glittering performance in New York would reveal to me.

At the inevitable price of some minor dross - during a public performance that is-, I was hearing for the first time in full, Paganini’s score freed of the cautious approach it dictates, played by a violinist, as if possessed, who, in a fantastic act of musical imagination, identified himself completely with it and with its composer, combining technical achievement and pure music. Those diabolical ‘esercici per il violino’ became true dramas in miniature – lyrical and expressive, worthy of Italian theatre’s finest music.

Naturally, I immediately resolved to make a film of this, to try and shoot it in such a way as to make the viewer experience as if from within the violin the prodigious wizardry of the score.

To me, Paganini’s music seems as much, if not more, meant for the eye as for the ear, especially as interpreted by Markov. Of course there is no way I can go here into the detail of the filming techniques I was going to use.

Suffice to say that I tried to treat each Caprice in a specific way, with several subsequent sessions of filming with a single camera, derived from a live performance in the magnificent setting of the romantic Italian theatre of Reggio Emilia.

The camera is not a neutral instrument in relation to real life, and the adaptation of a musical score to the screen seems to me to demand the expressive potential of the three essential parameters of film: framing, light and movement. The camera thus becomes an instrument of transposition of reality, which, thanks to a complete control of framing, to movements very precisely calculated to complement the profound rhythm of the music, and to specific lighting for every take, allows the expressive revelation of the fascinating mechanical detail of the act of making music.