In these hard times for the recording industry, many seasoned artists are not having their contracts renewed. As for younger artists, chances that they can arouse the interest of a record company are very slim indeed.

David Fray is such a blazing talent that he is one of the few pianists of the younger generation recently to have been signed exclusively by one of the current majors, Virgin Classics, following a uniquely successful concert given in Paris at the Théâtre du Châtelet in June 2006.

His first recording, recently released, was devoted to works by Johann Sebastian Bach and Pierre Boulez, a coupling which gives an intriguing idea of the originality of his repertoire. 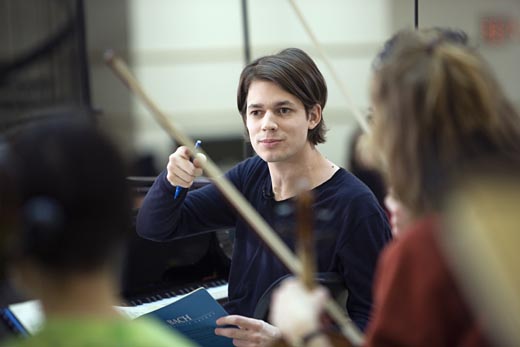 
In January 2008, David Fray recorded his second disc, in which he directed the Deutsche Kammerphilharmonie Bremen from the piano, with a programme this time comprising four piano concertos by Bach – concertos which, together with the famous Brandenburg Concertos, are among Bach’s most popular and stimulating works.

One of the main problems posed for the present-day performer of these works is that they have been “touched” by Glen Gould; this “rascal Gould, who has stamped his indelible mark on them”, as David Fray puts it. In other words, it’s a matter of finding a way of playing Bach after Gould. By copying him? That would be impossible and in any case pointless, if not ridiculous. By systematically distancing oneself from him? That would amount to making a futile, negative copy, of dubious interest.

But Bach’s music is so rich and boundless that there remain numerous exciting options for the performer’s imagination – assuming that he has any – and David Fray’s imagination happens to be one of his most striking characteristics.

In any case, the purpose of the film we have made about the recording of these Bach Concertos was to follow David Fray in his search for a completely personal way of approaching these sovereign works. 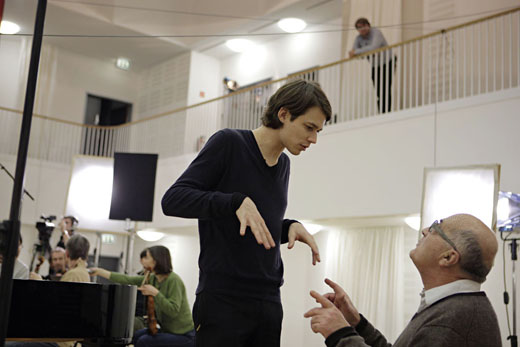 
We intended the film to have a seemingly simple structure. We set our mind on three situations – intercut, of course, in the editing – that would provide the background for the shooting sessions: 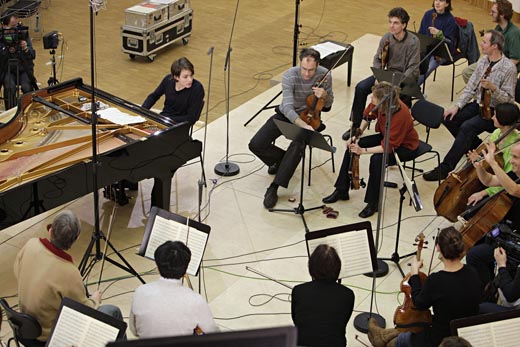 
Bringing together a great pianist fully committed to the fantastic expressivity of Bach’s music, knowing precisely what he wanted and having the means to formulate it and carry it out, and a so-called “baroque” ensemble, was likely to create, as can be imagined, a situation of possible conflict. And in fact, such predictable moments of great tension between them did not fail to materialize. But just as tension and resolution are the basis of all music, the quality of their mutual understanding in the end resulted in a divine rapport such as should always exist when great musicians meet, setting aside any vanity and striving above all for the “higher interests” of art. (Incidentally, this dialectic of tension and release is not only of a musical nature; it is likewise eminently cinematic, and we have had recourse to it to shape the unseen skeleton underlying the final structure of this film.

True baroque style could never be confined within the limits of the quest for an illusory instrumental authenticity. It resides, beyond philology, in the spirit, and it is at that level that David Fray has captured it with such moving eloquence.