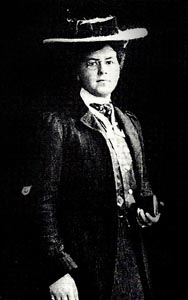 “You’re letting yourself be ruled by technique!”

On the lips of Nadia Boulanger, there could be no more scornful dismissal than this; and I was the person she was addressing.

Beginner that I was, I had just committed a serious psychological error. It was in 1973, Nadia Boulanger was eighty-six, and we were just starting work on a film that I wanted to make of her. The first sequence that we were planning to shoot was of one of the group classes that she had been giving invariably – ritually – every Wednesday for almost sixty years: Nadia Boulanger’s famous Wednesdays. This was before the days of relatively inexpensive magnetic video tape: we were still using 16 mm film, which we had to be careful not to waste. The camera had to be reloaded every eleven minutes. Although the operation took little time, it was all the more disruptive for that. Needless to add, I had not dared to explain to an elderly lady who was anxious above all to maintain a sense of continuity the reasons why I had to interrupt the filming. I had naïvely thought that I would be able to soothe her if I merely mentioned a “technical problem” without going into detail. Not for a moment did I imagine the angry reaction that this would provoke on her part.

After that, I would of course take care never again to interfere in her work with her pupils, even if this meant losing the thread while the camera was being reloaded. We would later take whatever cutaways and link shots were necessary, while the editing process would allow us to re-establish a sense of continuity. In other words, I was learning the rudiments of the profession while working with Mademoiselle Boulanger.

Although I was never her pupil, I had already met her on several previous occasions before submitting to her a plan for a film that I had been brooding on for some time. She welcomed the idea of a portrait with a questioning but amused expression in her eyes. She told me that she was terribly busy: even at her advanced age, she was still dispensing her legendary lore to students from all over the world, organizing lectures and concerts and scrutinizing new scores by young composers with the same insatiable curiosity that she had evinced for decades.

In order to bring my plans to a successful conclusion, I first had to enter more deeply into her world, a world of rigour and intransigence, but also a world in which, once all matters of musical technique had been mastered, she could abandon herself to the mystery of inspiration. If Nadia Boulanger was imperious and strict – towards herself as much as to others – she also radiated tenderness, humour and the joy of making music.

I discovered all this for myself during the days and weeks when she agreed to see me almost every day so that I could prepare a scenario sufficiently fixed as to allow for a certain improvisation – and again, some time later, when we worked together on a series of thirteen radio broadcasts intended to develop the themes that the film of three years earlier had barely been able to broach. The programmes were recorded at her home every Tuesday between three and six over a period of a whole year. She herself had decided that this should be so. Nadia was then almost ninety; she was exhausted, and speaking clearly was effortful for her, but her faculties of musical analysis and her lucidity remained intact. Sometimes, in my concern not to overtax her, I would suggest that we should curtail our sessions. What was I saying? There was no question of our doing so. She would rather have died than allow herself a moment’s respite! We stopped work at six on the dot, and tea was served by her entourage of ladies, after which she would receive her next pupil or deal with her voluminous correspondence. And so it went on until the end of her life. 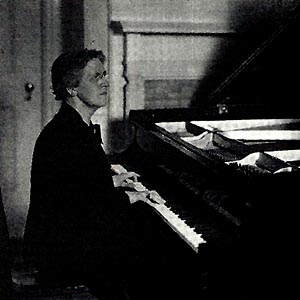 
Nadia Boulanger did not like to take others into her confidence and to entrust them with secrets about herself or the countless individuals from the world of music who had been close to her. In the case of my film, I was not in any case interested in questions of a biographical nature. Rather, I wanted viewers to sense for themselves the force and flavour of a woman who had exerted a considerable influence on the musical life of the 20th century as it drew to an end. These, then, are the framework and the limits of this film (which is not free from the faults of a first opus), but also no doubt the reason why she gave it her approval.

The film seen here has undergone several transformations. When originally shown, it was divided into three different episodes, a form which left me feeling dissatisfied. On the occasion of Nadia Boulanger’s ninetieth birthday in 1977, I had an opportunity to rework it and to make it more compact, which I did by removing some of the sequences that struck me as weak and by shooting some extra footage that allowed me to add the testimony of Igor Markevich and Leonard Bernstein, two of Nadia’s most famous disciples. Finally, I got down to the business of re-editing the film, in that way giving it not only its definitive form but also a greater sense of unity.

It is difficult for us nowadays to imagine the prestige that Nadia Boulanger enjoyed. Sometimes described as the High Priestess of Fontainebleau, she was a legend in her own lifetime and beyond. In the wake of Aaron Copland in the early 1920s, it seems as if the whole of musical America travelled to Paris to benefit from “Mademoiselle’s” advice, to such an extent, indeed, that there can hardly be a town, if not a borough, in the continent of North America that has not sheltered at least one of her pupils, famous or obscure. She was the mentor and moral conscience of a – temporarily? – vanished world.

What better way of giving an idea of the veneration and affection in which Nadia Boulanger was held across the Atlantic – as well as in many European countries – than by reproducing the letter that Leonard Bernstein wrote to me? Nadia had just died, and I was preparing to publish a small book of conversations with her*, a book for which I had asked him to write an eyewitness account of his own.

The last visit I had with Nadia was on her last birthday. I don’t think she knew it was her birthday, since she was in a coma. But Nature seemed to know it, providing for the occasion an unforgettably radiant September Sunday, with the intense blue of the cloudless sky competing in saturation with the rich greens of the Fontainebleau gardens. The air trembled.

Everything conspired to urge me on to Fontainebleau that day: my one free afternoon in a three-week working visit to Paris, the exhilarating weather, and the certain knowledge that it would be my last time with her. On the other hand, there were some strong warnings against it from her closest friends and guardians: Mademoiselle would be disturbed and exhausted by a visit; she could not speak, and in any event would not recognize me. Tant pis: I paid my visit, as if compelled.

I was ushered into her bedchamber by the angelic and anxiety-ridden Mademoiselle Dieudonné, who, with forefinger to lips, and seconded by an attending nurse, whispered a sharp order: ten minutes only. As it turned out, the visit lasted closer to one hour.

Nadia was beautifully dressed and groomed, as if for the coffin. Her crucifix gleamed at her throat; her eyes and mouth were closed; her whole face seemed closed in coma. I knelt by the bed in silent communion. Suddenly there was the shock of her voice, deep and strong as alaways.

“Who is there?”
I could not respond for shock. The Dieudonné finger whipped to the lips. Finally I dared speak:
“Lenny, Leonard…”
Silence. Did she hear, did she know ?
“Cher Lenny…”
She knew; a miracle. I persevered.
“ My dear friend, how do you feel?”
Pause. Then that basso profundo (through unmoving lips!):
“Quite strong.”
I drew a deep breath:
“You mean…inside yourself?”
“…Yes. But the flesh… »
« I quite understand », I said hastily, to shorten her efforts. “I’ll go. You must be very tired.”
“No tiredness. None…”
A protracted pause, and I realized she had drifted back to sleep.

Signals from the astonished attending ladies suggested my departure, but I was held there, unable to rise from my knees. I knew there was more to come, and in a few minutes, it did come.
“Don’t leave.”
Not a plea, but a command. I searched my mind anxiously for the right thing to say, knowing that anything could be wrong. Then I heard myself asking:
“Do you hear music in your head?”
Instant reply:
“All the time.”
This so encouraged me that I continued, as if in everyday conversation.
“And what are you hearing at the moment?”
I thought of her preferred loves. Mozart? Monteverdi? Bach ? Stravinsky ? Ravel ?
Long pause.
« One music…(very long pause)…with no beginning, no end… »
She was already there, on the other side.